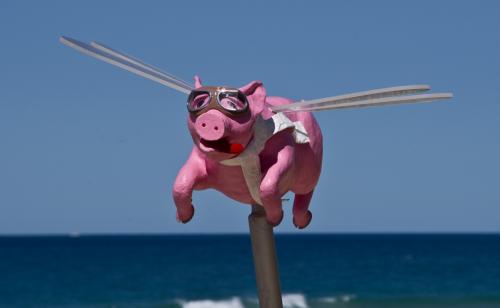 The Search for the Pilling Pigs

The village of Pilling lies on the North Fylde coast at the southern edge of Morecambe Bay. Anyone who knows the village will be aware of the Pilling Pig. This was the name given to the train which ran from Garstang to Knott End as it made a squealing noise just like a pig. The train stopped running many years ago, but this year it has provided inspiration for a village treasure walk, The Search for the Pilling Pigs.

Preparations for the event began in July when a plea went out for help to paint and decorate wooden pigs made from recycled scraps of plywood.

The response was overwhelming with lots of willing volunteers who each had their own unique ideas for their decoration. From children as young as four months to octogenarians, it seemed that everyone wanted a pig to paint. A second set of pigs had to be cut to cope with the demand. These pigs really flew!

Soon the pigs began to return and each one was a masterpiece. Many depicted rural life, from local buildings to the wonderful flora found in the hedgerows. There were abstract designs, flag designs, characters including a fearsome pirate and even a potbellied pig with a real potbelly (made by the local pottery.) Businesses, schools, nurseries and local charities and organisations joined in too. In all there were over 30 pigs!

On the day of the walk, all the pigs were placed around the village, on roadsides, footpaths and bridges to form the route of the treasure hunt. Each had a pig themed quiz question attached.

Fortunately, the weather was kind and the crowds turned out for the event. It was great fun tramping around the fields and footpaths, and when the weary hunters returned there were excellent pig themed refreshments waiting for them. Then there was time for games such as pig racing and feed the pigs for the children and a photo quiz for the adults.

The peoples vote for the best pig went to Meadow, a beautiful pig painted by the Varley family, depicting a typical country scene with flowers, bees and butterflies.

The event was organised to raise funds to help build a new village hall, but The Search for the Pilling Pig was more than just a fundraiser. It brought the whole village together to celebrate as a community and enjoy family fun in the fresh air.

It is hoped that next year a more permanent trail can be made around the village for visitors to follow. In short, we're going to need more pigs!